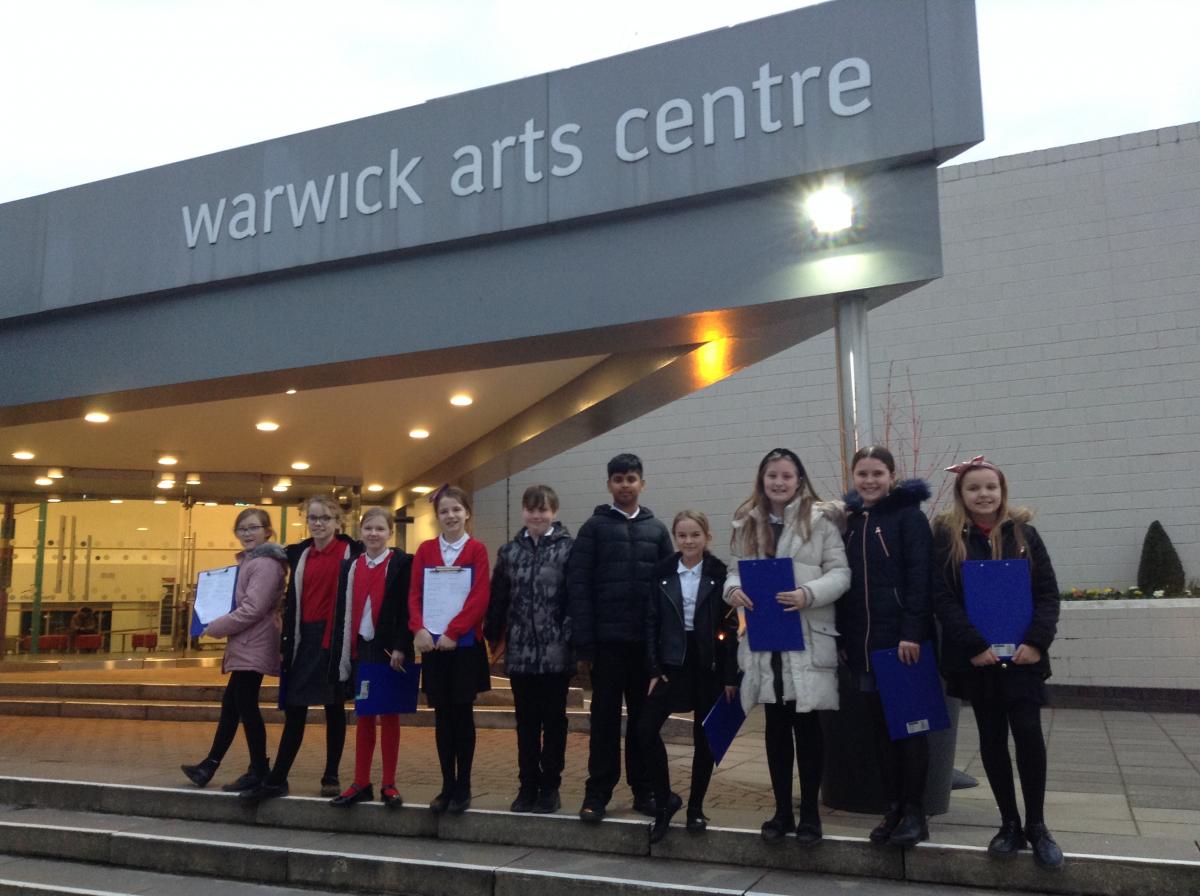 Our visit to Warwick Arts Centre was amazing – I was so inspired. We got told how many people that were famous performed there. We even got a tour of the stage and behind the scenes. When we were all sitting down in a circle, two nice people we were with told us about the history behind it.

When we went to Warwick Arts Centre, we learnt how many people came to their most successful play (stickman), there were 10,000 people there in one audience. There was up to 100 spaces in the dressing rooms. We went backstage and saw the workshop. My favourite part was when we went to the sensory room and they had squishy cushions and models and beanbags that were very comfy. The biggest challenge for me was asking questions because I felt a bit shy. Warwick Arts Centre started in 1974, 47 years ago!

At Warwick Arts Centre, we got showed around back-stage, on stage, the warehouse, the learning centre and the changing room. My favourite part was the changing room because I love fashion and make-up. I learnt that 53 people work here, it was open in 1974 (47 years ago). People who perform at Warwick Arts Centre can be 3 years old and up to 80 years old! The biggest challenge was to speak and not get lost!

They talked to us about how theatres work and showed us around. My favourite part was going backstage. We learnt that it opened in 1974 (47 years ago).

We were taken to one of the stages and we also asked many questions. We saw some props and wooden structures. My favourite part was to stand backstage. We learnt how a stage works.

When we visited Warwick Arts Centre, we were allowed on stage. There are 220-240 chairs. We also learnt there are 53 people that work there and it opened 46 years ago. Tom, who is a technician, and Kate, who works in Creative Learning, showed us around. The most successful plays were Stick Man and their Christmas play.

We arrived at Warwick Arts Centre and were led into a quiet room with many mats and rugs on the floor. We took it in turns to ask two members of staff (Tom and Kate) questions. They answerwed most of them but we found out the rest as we went around. First we were taken into a room where a show was about to be held. We went straight from there to backstage. Backstage was massive and smelt like wood; it looped round to their medium sized stage. There were 540 seats. We then went to a dressing room which was still quite big. We ended the day with an awesome photo.

We went backstage. It was very big and it was super interesting/ It opened in 1974 so it has been open for 46 years. Backstage had a load of wood and equipment to help them set a scene. There are 9 dressing rooms there but they are quite small. Their most successful Christmas play was Stick Man. They had about 10,000 people.

When we went to Warwick Arts Centre, we got to go backstage and look in the dressing rooms and go on the main stage. We found out the 53 people work there from technicians to cleaners. My favourite part was walking through backstage. Backstage was very big. We also found out that to perform there you can be any age. They have had from 3 to 84 years old.